Home Humanities Women and Their Shoes in the 50’s

Women and Their Shoes in the 50’s

Shoes in the 50’s really completed the get-up for ladies. Still today, if you are dressing up for a Halloween party or local Sock Hop themed dance, you need the right shoes and socks to get your outfit just right.

Flats as well as heals were in during this time period. Saddle oxfords are the traditional shoes to complete any poodle skirt. These were worn to school or a date. The flair of the poodle skirts and the comfort of saddle oxfords would make it a perfect outfit for any dance as well. Oxfords were white and black. They were best worn with white shoe laces as well. 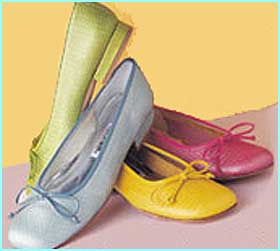 The ballet shoe was a popular flat worn to church and even school. Girls would wear white laced socks, with the lace folded over.

Penny loafers were also a hit during this time period. These were flats worn by both men and women. They are much like the loafers worn today but they had a slit that was located toward the top of the shoe that you could put a penny in. If the shoes were really cool sometimes you could fit a quarter in it.

Many believe that the most popular shoe of the 1950’s was the stiletto-healed shoe. Some being as high as 5 inches, they came in both open and closed (and pointy) toed variaties. They were first seen at the Dior Fashion Show in 1952 and really made a splash for the next decade or so.

Oxfords are different than saddle oxfords. This was another style that was worn by both men and women. These had the same style as the saddle shoe but it didnt have to be black and white. It was typically leather that could be any color. Some referred to these as Balmorals.

A really popular high heel shoe was the Mary Jane. These came in a lot of different colors and heights, and had a strap that would go over the top of the foot. These were popular for church socials, school or dances.

Bobby Socks were very popular in the 50s. This is a trend that was started in the 40s. This is the name for the socks that fold over and at about the ankle height. Many times these were used for school uniforms. They were also worn with saddle shoes, loafers and oxfords.

About the Author:
Have a sock hop coming up? Get your complete 50’s Poodle Skirt Outfit at Hip Hop 50’s Shop. We provide the highest quality product and will ship it to you quickly. We are a small business that puts a lot of TLC into every poodle skirt, blouse or crinoline slip we make. 100% satisfaction guaranteed.