Home Animal Ways The Animals of the Aberdare Ranges of Kenya: The Leopard

The Animals of the Aberdare Ranges of Kenya: The Leopard 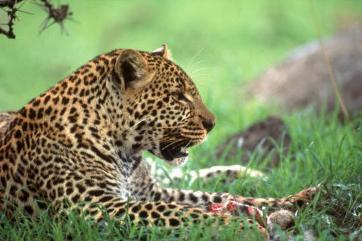 The leopard is easily recognizable by its rosette-patterned coat and extremely long, darker tail. It is pale yellow, patterned with black rosettes. The head, lower limbs and belly are spotted with solid black. Despite its relatively small body size, the leopard is capable of taking large prey. It has a huge skull, which gives ample room for attachment of powerful jaw muscles. It has markedly long whiskers and has several extra long hairs in the eyebrows to protect its eyes and assist in movement through vegetation in the dark.

The leopard is an extremely versatile hunter. It is nocturnal, meaning that it is most active between sunset and sunrise. The male and female with young are more active hunters than the solitary female.

The leopard’s prey in this region includes young eland, impala, gazelle, hares, rock hyrax, reptiles and insects. The leopard is highly adaptable and can change its diet according to what is available in its environment. The leopard hides its prey high on tree boughs to protect it from other large carnivores: the lion and hyena. The leopard is very strong and can carry prey up to three times its body weight high up into the treetops. Competing directly for food with leopards are the lion, hyena and jackal.

Leopards can live independently of water for periods of time, obtaining their liquid requirements from their prey. They have been observed to ambush terrestrial prey by leaping down from the tree branches. This behavior however is opportunistic and relatively uncommon. Faced with direct aggressive confrontation with other large carnivores, the leopard will retreat up trees.

Leopards have a gestation period averaging 96 days but it can be anywhere between 90 -100 days. They normally produce between one and four cubs. The cubs become independent at 13 –18 months with the females becoming sexually mature at 33 months. Leopards normally live to the ripe old age of 10 -15 years in the wild and up to 25 years in captivity.

Though, without doubt, one of the most beautiful cats in the Aberdare Ranges, the leopard is famed for its wicked temperament.

The leopard is definitely one of the cats you do not want to meet in the dark!

The Animals of the
Aberdare Ranges of Kenya
by
Nyambura Kiarie