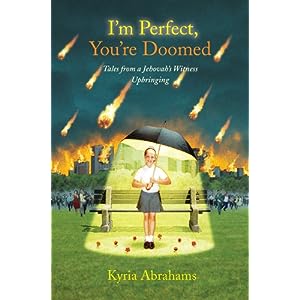 The author tells her own story of a girl brought up in a fast growing religion within a decade when the movement was at its height of proliferation.

With her family devout and an inherent, ingrained, strong undertone of Semitic influence, she is driven from infancy into a ‘better world’, promising in essence ‘the truth’ to all life’s many ills.

Instead , the punishing regimes inflicted on her from this newly acquired religion shared by her family, cast a long shadow of over her hope to be free to make her own choices as she grows up. She is thrown into very different world, completely alien to other kids her age. That world, is one of repression, and the warders of that world mean to break her will. It’s a tale of cruel demands and their hunger for her unflinching obedience.

This is a true account of the author’s exposure to relentless psychological control, fear and intimidation in her first years. The story brims with a vivid recollection of high detailed ‘day and nightmares’ delivered to the reader with satirical skill. The work is rich with humorous anecdotes, inspiring adjectives, and cut throat timing.

This is a high octane, moment by moment, description of her imposed neurosis as a small child and the lamentable misplaced trust in her carers. Bursting from the first pages is a rousing portrayal of a loving, bright, skittish girl, wide eyed with wonder and full of fun, until the clouds of a cold blooded cult begins to shackle her.

The story unravels, as a complicit store of revelations, about the central character’s own vulnerability in those tender years and the ravages of subliminal thought control.

The reader realises that the author has an admirable ‘tongue in cheek’ equivocal side, yet at the same time, buttonholes the scenarios with a trademark “OK, you are back in the room, make of that bit, what you will”. This she does with a flash in her eye, making the reality of what she experienced more palatable, and a ‘should I, or shouldn’t I,’ teasing hilarity, with an original and warming sharp turn of phrase.

“I’m Perfect, You’re Doomed,” is a compelling and curious read, and in my view, of what appears, at first, a forward about a rather disturbing Dickensian-type of ‘over-parenting’ but then, sprouts a more sinister edge to the proceedings. For lurking at each corner is another fake promise of clarification from her oppressors, that only freeze you in the headlights of incongruity. For on several occasions the reader is struck by the insanity of this young girl’s environment.

You, the reader, are dazzled and may want to to turn back. Clouds continue to gather and It looks even stormier ahead. It is indeed, for young Kyria, to all intents and purposes, has been kidnapped from her life, bundled into the truck of uncertainty, that might force her to go somewhere.. only she could go. To the end of her tether, or even, right out of her mind! A mind already festooned with ugly snapshots of guilt and oppression, papered over and over with bizarre maxims and regimes to follow blindly.

Mind control techniques designed against her, to indoctrinate and extinguish her free expression and force her not to develop as any normal child would or ever could.

A tale of alienation, isolation and social perplexities.

Yes, this is a socially explosive piece with great wordplay and a reassuring wit. It holds a charming irony that catapults the reader into what is the reality and power of cults. There is a smattering of fiery cynicism. A masterful touch within the plots presentation is that of the authors self-deprecation when one might expect a ‘poor me’ stance.

This is a refreshing take on a hugely controversial subject, and with each portion, one is dealt a hit of hilarity that will tickle your ribs and ambush you at the turn of each page.

There is no aftertaste, or the bitterness of sour grapes, once again, noteworthy of the author’s guile. Her character has great presence. You feel what she feels. She is cut and the reader bleeds. There is great command of the English language and is well constructed.

My own sketch is: Memories no matter how obviously painful to write about, are laid out on the fine linen of respect. It is surprisingly reverent. Compassionate. It seems to reflect quietly, but with determination the authors need to tread her own rite of passage, and offer encouragement to those who might find themselves in the same predicament.

She has embraced so many features of emotion in this work it will relate to anybody whatever their religious persuasion, or not, as the case may be.

It is powerfully organic.

It is a true reflection of the author’s honesty and literary prowess. Showing integrity to the heartfelt message and not written for her own political ends or story bias. In truth, it could have been a tale out of Stephen King, if it not for the nimble fingers of an author with full discretion and an intelligent hand. It is quite sensational without the need for angst fuelled melodrama, which it might easily have been.

To the uninitiated this is a unique read. A look at the gradual anguish of an innocent ,that starts off in the first few pages to paint a picture of optimism, but one reads on, with the occasional shudder of what seems the overkill of candour and heartlessness of others professing a duty of care.

The story unfolds cloaked with esoteric manipulations, trudging a journey filled with mixtures of felicitations and triumph only to then be dashed on the rocks of despair. In life happiness and despair go hand in hand. We learn of Kyrias strategies to deal with both in this influential biography. A delightful book.

Kyria’s message is interpreted by me as…“When obedience is demanded conformity is not always a good thing. Compliance is even worse.”

This is a refreshing take on a hugely controversial subject and with each portion one a charitable well aimed jocular lilt and rolling hilarity will ambush you at the turn of each page.

Kyria Abrahams author and stand up commedien. She lives in Queens with an abused cat that she just knows will start to love her some day. Her humor has also been published in Not Quite What I Was Planning: Six-Word Memoirs by Writers Famous and Obscure (Harper Perennial, 2007) the THE BOOK OF ZINES: Reading From the Fringe. For two years, Kyria Abrahams was a regular columnist for Jest Magazine, where she was featured alongside performers and writers from The Daily Show and Chappelle’s Show. She has been a past performer at alternative comedy shows like Eating It and Invite them Up, as well as literary readings like How to Kick People.