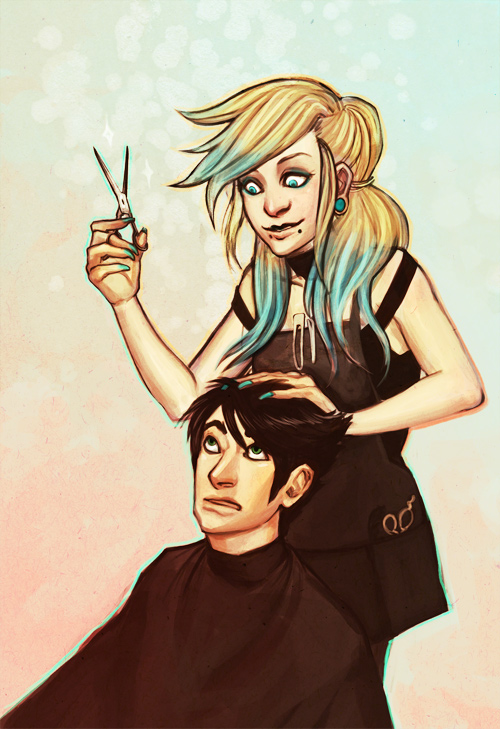 The recession has started to affect my hair.

Gone are the days when I could afford to visit poncey salons, where I was served frothy coffee while my locks were snipped and pruned.

I must add that these visits were out of necessity rather than vanity. You see my head is rather Neanderthal-shaped, and it was only the skill of those hairdressers (they like to be called art directors at poncey salons) that could disguise my Neolithic noggin. But nowadays, I just can’t afford the £30 plus price tag that comes with it.

So I now go to budget barbers, which means I walk the streets looking like I’m waiting for my thumbs to evolve.

That was until I discovered a Turkish wizard, who opened up a barber shop at the end of my road; he wields a pair of scissors like Harry Potter wields a wand. I found him one Sunday when I had a severe case of ‘dad hair’ that really needed rectifying before a 9am meeting the next day. Nothing was open except for sofa shops with their endless sales. I had nearly given up hope when I turned into my road and found that a new barber had sprung up over night. A small man was in there drilling things into walls. I peered through the window, expecting to be shooed away. Instead, a small round friendly face looked up and said “Come, come. Would you like a haircut?”

Typical English reserve kicked in: “Are you sure that would be OK?”

“Of course, sit, please.” I told him of my many bad hair days and he nodded sagely and began to cut. My new Turkish friend went into a savant-like trance, snipping away like a kind of hairdressing Rainman. He did not speak once. His scissors were a blur and hairs flew off my head like I was being seen to by Edward Scissorhands himself.

The end result was a follicular masterpiece and I looked like I could count myself as a paid-up member of the human race again. And the price? A measly £6. I couldn’t thank him enough and vowed to come back, and that I would recommend him to all my friends.

It was with some excitement I returned last week for my second haircut. But my Turkish friend was nowhere to be seen. Instead a large, muscular Polish woman, who looked like she could crush walnuts in her armpits, appeared from the back. “You have haircut?” It was more of a demand than a question. I nodded and duly obeyed, sinking into one of the large chairs. “What you want?” She asked staring at my reflection in the mirror. I timidly told her and she immediately disappeared, only to return with another Polish lady who was stick thin and chewed gum slowly in her mouth like a camel. “I translate for her”, said the big woman. She rapidly relayed my instructions in Polish to her slim colleague, whilst occasionally prodding different parts of my head.

The non-English speaking hairdresser laid into me with the clippers. Gone was the laser-guided precision of the scissors when I was previously here. She mowed my hair up and down like she was harvesting wheat. Even the long bits on the top of my head were attacked with clippers. When the carnage was over, my head was doused with water and she began blow drying. I knew I should have said something at that point, but that would mean disturbing the scary female shotputter/translator who was now ensconced at the back with a newspaper.

A brush was now employed, with which she scraped my hair back so tightly that it looked like a wave breaking over a harbour wall. Something had obviously got lost in translation. My finished appearance was not so much Neanderthal, more Russian gangster’s henchman. All I needed was a shiny tracksuit and I could start demanding money off of people.

I smiled weakly at the woman, paid my money and made a swift exit. Walking back to my car, I clawed at the bun of hair that now adorned the top of my head, trying to wrestle it into some sort of shape. But it wouldn’t budge.

I sighed, got out my phone and made an appointment with a poncey salon.