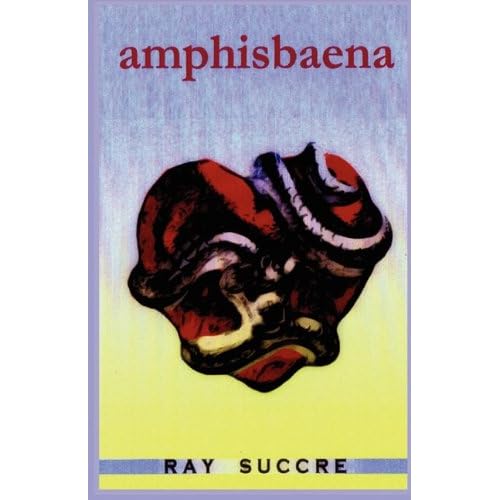 Click the title below to go to Amazon for more info.
Amphisbaena

Synopsis. “A sober disinterest in relationships causes Bill Sherman, failing calendarist, to abandon dating for many years.  When pressured into a speed dating event by his brother, Bill meets Amy and decides to attempt a relationship again.  He learns quickly, however, that Amy is two people:  The inseparable Amy and Janine.  These two women design to date Bill in tandem, both to his confusion and enjoyment.  Where Amy holds Bill dear to her heart, Janine is unable to function outside of physical pleasure.  Bill soon discovers that this strange predicament is only the beginning of a much larger system of rules and interaction, and the relationship changes more when Bill realizes that the two women happen each to be one half of an ancient, two-headed black snake.  Amy is the alpha head and has subjugated her poison in an attempt to understand human notions of beauty. Bill is not allowed to touch her.  Janine is the enticer head and may not be in league with Amy where Bill is concerned.”

“Can a man love if there is only appetite? Will he care more deeply for the woman he can never touch? What happens when monogamy becomes taboo and a fine-tuned machine of murder learns the human consequence of going against one’s nature for a greater meaning?”

“Laden with whimsical depiction and a foraging exposition on gender, occupation, and dating in modern society, Amphisbaena is the story of three people trapped somewhere between nature and culture, through a humorous adventure into the biological mess of love and romance.”

Comparing Ray Succre’s latest book, Amphisbaena to his last, the remarkable, witty and quite brilliant Tatterdemalion can yield some interesting results. It’s not necessary to do this in order to enjoy Amphisbaena. However, it does reveal a lot on some of the subjects that seem to compel Succre the most often in his work. Amphisbaena is packed with some of the same themes that ran through Tatterdemalion. This most strongly includes the subjects of family, the struggle to remain creative and true to that creativity, the act of slipping into fantasy and not knowing to slip back to reality, love and madness. Above even those things, both novels portray a sharp, entirely too real protagonist and his desperation to avoid complete disconnection from the world, even when it becomes almost impossible to do so.

There’s nothing wrong with being obsessed by certain themes, ideas and all of the storytelling potential they can offer. The trick is simply to make sure you don’t repeat yourself word-for-word. Ray Succre is not the kind of writer who struggles with that. Although Amphisbaena carries the mark of being very much the work of its author, of being distinctly in the spirit of what he’s written so far, it’s definitely not the same old thing. Amphisbaena is a completely different series of thoughts and speculations on some of topics Succre spliced through the narrative flow of Tatterdemalion. These things are important for him to capture in this new work, but they never come at the expense of the story. Amphisbaena has one to tell, and that’s where the book gains the greatest distance from anything he’s done so far. The story alone is easily is most impressive, creative to date. All the more for how well it all comes together.

The easiest way to lay out Amphisbaena’s plot is to describe it as a love story. That’s the easiest term to go with, but it’s not the most accurate. Every chapter includes a quotation from a different romance novel. All of these quotations are purely the creation of Succre. The sole exception is the first one, taken directly from Lady Chatterley’s Lover. It’s no great secret why that stands as the only one you can look up at your local bookstore. It’s not that Lady Chatterley’s Lover and Amphisbaena are exactly the same, although you could draw some similarities in the undertones and characterizations of each if you wanted to. It’s that both of them use love to relate something much greater than what a single word can encapsulate. Bill Sherman, the novel’s weary, burnt-out protagonist is a man who has just about reached of failing in everything he’s ever done. He’s middle-aged, lives in his goodhearted brother’s garage and has almost nothing to show for the life he’s lived. He struggles to maintain his vision as a creator of calendars, he babysits his brother’s kids, and he only really ever becomes the kind of person he wants to be in his dreams.

Obviously, something needs to come along and kick Bill’s ass a little. It comes in the form of speed dating event, which Bill only accepts under the same motivation that drives most of his life, boredom. He has no intention of finding someday, but somebody certainly finds him. Amy is quickly established as a personality of great interest to Bill. She is a striking, clever and quietly venomous (no pun intended) woman who not only immediately asserts herself a place in his life but in the story as well. Everything we’re given to know about Bill and his life is just a means to bring us to the first time they meet.

That’s when the story gets into the territory that appeals to Succre the most. Its point where Bill is completely absorbed by Amy’s looks, her mysterious energy and a charm that is often both sharp and compassionate at the same time. The book takes off running from there and begins drifting back and forth between the surreal, the beautiful, the calmly hilarious and the tragic. Succre seems to have the most fun when he really starts to take his characters into the great unknown. We get a strong introduction to Bill, his world, his life and the people in it. Succre is a master at setting the scene. He’s brilliant at giving us just enough to get attached to Bill in the moments leading up to when his world takes that sharp left turn into weird country. We get the perfect introduction to Bill, but it’s not until everything begins flying in a thousand different directions that we really begin to learn about him. It is in his relationship with Amy and in discovering her secret that we really begin to learn what kind of a person Bill really is.

The secret, of course winds up being a typical Succre literary uppercut. Because it’s not enough for Amy to just be alluring, infuriating and endlessly compelling. She also has to be an ancient creature that long ago made the commitment to join with humanity and learn more about them. The book’s title, Amphisbaena is derived from Amy’s true nature of being a serpent with two heads. Amy represents the stronger of the two, the alpha. She provides everything but the physical demands of a relationship. Rather than risking the serious consequences of breaking this rule, which she establishes to Bill early on in their relationship, she diverts the physical to her second head. Janine is pure sex, affection and the kind of ego boosting every man supposedly needs. She is warm, inviting, nothing less than giving and absolutely out of her mind. Succre gets plenty of mileage out of the whole bizarre arrangement, out of Bill’s slow understanding of what he’s taken on by falling for Amy and she for him. We learn miles of his history, his personality and depth as a character. The same gift is granted to us with Amy and Janine, who wind up being much more different from one another than we are first led to believe.

While never skipping out on the humor (it’s there in spades) or sharp dialogue (more than enough to go around), Succre never ceases to infuse every page of his book with some sort of personal revelation about his characters. He is forever lending something that brings them even closer to the highest form of reality a fictional character could ever hope for. It must be the poet in him. The language and imagery moves with the energy of a poet, abstract one moment and stunning in its clarity the next. The paragraphs that rely on nothing but Succre’s attention to detail, the innermost thoughts of his characters and what there is to see in the world around them are some of the strongest in the book. They succeed beautifully in pulling us through a universe that’s even stranger, richer and steeped in beauty than the one we had with Tatterdemalion. They bring us right into the heart of what Succre wants us to see in his characters, their opinions on everything from love to creativity and family and the state of a place that isn’t too far off from the one many of us exist in. Reading through Bill’s life, especially his past, it’s almost impossible not to be drawn into our memories and stories. Bill’s memories, his rejections and humiliations occasionally drift into ours. It might be troubling, but it never fails to be fascinating and further evidence of just how good a writer Succre really is.

The core of Amphisbaena is that it’s love story. Granted, it’s a love story with a few dozen layers around it, but it’s still a love story. It’s also one of the best love stories to come down the literary line in quite some time. There is absolutely no question that Ray Succre has once again succeeded in carving something new out of very familiar territory. The best thing about that is in knowing that he’s talented enough to go back to these ideas as often as he wants. Whether or not he can come up with something new each and every time shouldn’t even be up for debate.

Click the title to go to Amazon for more info. Amphisbaena