Home Business All About Going That Extra Mile

All About Going That Extra Mile 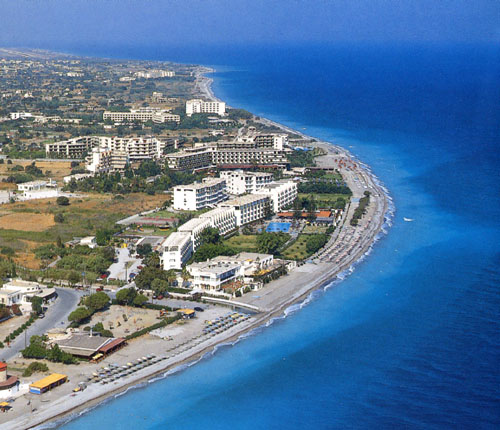 In April I spent two weeks in Rhodes.

It’s a great island with super beaches, loads of ancient ruins to visit and wonderful people (it’s hard to find nicer people than the Greeks).

I took the sun, ate Fetta cheese until I started butting people and fancying tin-cans for dinner; admired the topless beauties and drank Ouzo.

But this isn’t a postcard from your old Uncle Alf, so you’re probably wondering why I’m telling you all this.

I drove to the airport, optimistically expecting to park in the long-term car park for a couple of weeks. Ahh, sweet old innocent me, eh?

“You wanna do wot mate? Park your car? Nah mate, NO chance – ‘ave you booked?”

I looked blank. £65 a day, and there were so many people desperate to pay this amount that you needed to book?

Sharp intake of breath, and sucking noise from attendant. He shook his head slowly in mock sorrow, then leaned forward conspirationally.

“Look mate, tell you wot I’ll do for yer. Drive over there and see Steve. He might be able to ‘elp yer art.”

Not aware that my painting skills needed improving, I nevertheless did as directed. This was the deal:

‘Steve’ couldn’t guarantee anything, but if I left my car keys with him, he’d park the car as soon as a space became available. When I returned from holiday, he would locate my shining new Mercedes and bring it back to me. No extra charge.

There was a strange tickling sensation on the top of my head as my donkey ears began to grow, but I didn’t have a choice. The flight left in one hour and I was going to be on it. So, with a small tear in one eye, I handed in the keys and watched ‘Steve’ drive away in my new car. It was only then that I noticed he was wearing overalls with the logo Steve’s Mercedes Spare Parts Shop emblazoned across the back.

No, not really, but for a moment there…

Anyway, off we went to Rhodes and all thoughts of cars, home, and the office were quickly swept away in a sea of sun and a spot of Ouzo – or was it a sea of Ouzo and a spot of sun? Whatever.

All too soon the time came to return to the bosom of my motherland and my thoughts gravitated towards the reclamation of said vehicle and the location of one attendant, to wit, a certain dubious character calling himself ‘Steve’.

Alighting from the terminal-to-car-park coach, who do I see giving me a cheeky cockney grin and cheery wave but STEVE. Yes, my good ol’ pal Steve.

What a great guy he was. Funny, he didn’t look at all shady now – just a regular, nice, honest sort of chappie.

“Hello Mr Goldsmith! How was Rhodes?”

This was stunning, to say the least. But it got better.

“Here’s your car sir. I’ve taken the liberty of giving it a quick wash over as it got quite dusty sitting here in all this dry weather. Here sir, let me load those heavy cases for you.”

I gulped and stammered out my thanks.

“Nothing mate. I’ve already sold your stereo, so I couldn’t take any more of your money.”

Then, seeing the horrified look on my face…

“No, no, don’t worry Mr Goldsmith, that was just my little joke. You pay the parking toll at the exit booth on your way out.”

I tipped him twenty quid, and drove out. I was so stunned, I had to park the car and sit for a while. I needed to think this through. Surely I had missed something? It had all happened so smoothly, so quickly… I checked the glove compartment. Fine.

Aha! I leapt out of the car and checked the boot. Nope. The spare was still there. Then, suddenly, I got it. I realised what he was up to… There was no mystery. All was revealed. There was no scam, no con, the entire ‘secret’ had happened so fast that I had missed it.

I had tipped him a twenty!!!

That was it! Nothing more sinister.

I sat and thought. I reached for a pad and a paper. Let’s see, an average of 100 cars a day… and say 50% of people tip on average a fiver, that’s £250 a day, or £1250 a week or….gulp…. five thousand a month. No wonder Steve was so happy! People were so pathetically grateful to get their cars back, that they tipped him – and tipped him BIG TIME.

But here’s the very important lesson for you (and I’ll never tell you a story without a lesson attached). Steve went the extra mile, and it was this single fact alone which turned his no-hope, dead-end car park attendant’s job into a superb money-making business pulling in 60 big ones a year on top of his salary.

Steve could have chosen to be a miserable, unhelpful sod, sitting and sulking in his hut all day. (Well! I’ve never heard of car park attendant like that…) But no. Steve knew what it took to make big money. He knew the vital principle of business that in order to succeed, you need to go the extra mile. Do more than you’re paid to do. Work harder than you’re
supposed to. Do lots of little extra things which weren’t in the contract.

But before I left, he’d asked me my return flight number. He knew what flights were coming in, and when, so he had the cars ready and waiting. Boy, I sure did appreciate that, instead of having to hang around in the heat, waiting for my car to be found. That twenty I tipped him was good value.

Steve went the extra mile, and I want to tell you that every time you do this, it will pay dividends like you wouldn’t believe. And yet often people do the opposite. They work less hard than they need to. They give slightly less than the contract stipulates. They ‘short change’ you in every aspect of life. They think they’ve got one over on you by making a little extra, but they are the losers.

Have you ever bought a house and found when you take possession the house is dirty (“it didn’t say we had to clean it, in the contract”) and that they’ve taken the light bulbs with them (“they weren’t on the inventory”). Doesn’t that make you mad? This is an example of ‘short changing’ and it leaves a bad taste. Those light bulbs turned out to be pretty expensive for the previous owners, because I ‘forgot’ to forward their important mail to them over the next year. Shucks, I guess I just couldn’t read the address in the dark, without those light bulbs…

Then one time I bought a house and it was spotless. They’d left the bulbs (of course) and a fresh bunch of flowers on the table with a ‘welcome to your new home’ card. They didn’t have to do that. It wasn’t in the contract. But they went the extra mile – did more than they had to. That left a good feeling, and those people eventually became friends of mine with countless untold benefits – all for a bunch of flowers.

Here’s a sure-fire way of making money and improving your life. Go the extra mile. Do more than you are asked. Always see what extra value you can bring to a situation. It will pay you. I promise.

In Rhodes, I went SCUBA diving, which is something I like to do from time to time. I paid a wedge of cash to a diving firm to take me (and fifty others!) out for the day. It was an expensive trip, but a great day.

During that dive I met Gary. He was also making over £5000 a month, and having the time of his life with the sun, sea, sand and girls in the sunny Med. How? By adding extra value to the trip.

You’re diving the Med, a once in a lifetime thing (for most of the people there), wouldn’t you like a souvenir?

Sure you would! How about a nice underwater photograph of you on the bottom, waving to the fishies?

Gary went down with each party of novice divers and snapped their picture. Everyone, but everyone, bought the pictures (which he had developed in time for the boat to leave). He worked five hours a day, summers only, and made £30,000 having the time of his life. To do this, he just asked the question: “What extra value can I bring to this experience which people will pay for?”

The subtlety of this is that he didn’t ask: “What can I get out of this?”, but instead he asked: “What can I put into this?”. Of course, it amounts to the same thing and his motive was (rightly) entirely selfish, but this subtle difference allowed him to think in terms of adding value to someone’s life, in return for which, they would pay him.